Remember the old John Belushi SNL skit, where Belushi ensconced himself in the home of Jane Curtain and Bill Murray and wouldn’t leave? It came to mind this morning in thinking about my latest email from Mack. Yes, Mack still sends me notes from time to time. For months I didn’t reply, but when he sent sympathy notes about my brother, I felt I couldn’t ignore those, and so I thanked him. Since then, I’ve been responding to his emails. In his last note, he told me he’d finish paying off his financial debt to me next month, and we can then finally go our separate ways. 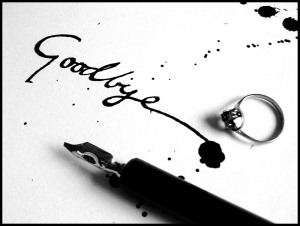 My initial reaction, if only in my head:

We went our separate ways eight months ago. Or at least I did.

But then I started thinking about it. Mack’s been writing me notes since I ended things back in September. He never stopped. In early December, I stopped responding. But receiving his notes, whether I replied or not, kept him in my head. Which I’m guessing was the point. He wrote a song about me once, which included the line: “If I can’t be the love of your life, I hope I’ll still be on your mind.” And here we are, eight months after I ended the relationship, and yes, he’s still on my mind.

The last note he wrote to me, I let him get under my skin. I responded, expressing my ire. I could have kicked myself the next day for writing back. But it’s got me thinking: When at long last he stops writing to me and sending me monthly payments, will it be like a breakup all over again? Of course on a much smaller scale. But will it cause me pain?

When have you truly moved on?