Blogging has taken a back seat to my new job. On top of being a lawyer at one of the Top 26 Elite Law Firms (according to a story on Law 360 this morning), I have inherited my father’s business. A business I managed to avoid for 30 years, save for a few unhappy summers spent working “for” my evil sister while attending undergraduate school. My sister and her husband stopped working at the family business nearly a decade ago because she didn’t get along with my brothers. After my dad and brothers all died during a span of 11 months in 2012 and 2013, other than my 77-year-old mother, only one employee remained.

That one employee was a high school friend who went to work for my father as a receptionist nearly 30 years ago. In this blog, I call her Jenny. Jenny met her husband, we’ll call him Josh, when he worked at the business for a time in the early days in shipping and receiving. After my remaining brother died in March 2013, our health insurance company advised they’d be cancelling our policy because we had too few employees–we needed one more. Jenny suggested that Josh, who’d been laid off from his job, return to the company’s employ while we figured out our next steps. In the midst of our fumbling around, my mother’s health suddenly declined in July and instead of going to work several days a week, she moved into an assisted living facility.

So now, in addition to being a lawyer in one of the top-20 largest law firms globally (another recent Law 360 story) and my mother’s power-of-attorney (which means managing her finances and the majority of her affairs), I’ve taken the helm of my father’s crippled business. A business which, due to my father’s Alzheimer’s and brothers’ alcoholism, had been sorely neglected for many years. And yet despite the neglect, it has survived. It isn’t thriving, mind you, but it isn’t dead. In fact, over the past year, Jenny and Josh have managed a slight increase in revenues. That, coupled with lower expenses (largely due to decreased payroll from the loss of the three principals), they’ve managed to pay off much of the company’s debt.

Working with my uncle and my financial-wizard neighbor, I’ve been learning the ropes of managing a business. I’ve studied the financials going back a decade, I’ve made charts and spreadsheets and graphs, and I’ve negotiated debt with one of our remaining creditors. I’ve given Jenny a long-overdue raise. And now that Josh has been on board for a year, it was time I figured out a suitable compensation package for him. I spent the past two weeks pouring over the financials with my two new mentors, and have settled on a combination of a modest increase in his already-modest base pay, plus an incentive tied to rolling annual net income. Before a couple of weeks ago, I could not have told you what rolling annual net income was. Let alone created an incentive earnings plan based on it. I feel pretty darn pleased with myself, if I do say so.

Last night, I gave Josh his raise. He seemed pleased and incentivized. The next step is to work with my uncle to create a strategic plan. This plan will include lots more charts and graphs, which excites me. Who knew? We will create concrete and hopefully achievable goals. We’ll have benchmarks with graphics. And pie charts. I love pie charts. I’ll use pink and purple and green. Oh my!

This morning, I decided on a title for myself: CEO and General Counsel. 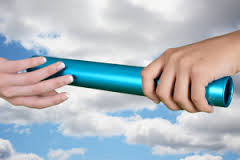 If things go well, maybe, just maybe, I can quit working at one of the Top 26 Elite Law Firms before another decade passes. Before it sucks out the rest of my soul and spits it onto the pile atop all the others. And in the process of saving myself, I will have helped save my father’s company. His legacy. I find it mildly ironic that the only child of 4 who declined to work at the family business is the one who (with any luck) will help it, along with Jenny and Josh, rise from the ashes. It just goes to show you, you can run, but you can’t hide. At least not from family. Here’s to you, Dad.