I quit smoking cigarettes (for good) eight years ago and became a Reformed Smoker. You know the type: smoking disgusts me and I make no bones about it. I don’t want to be around it, and I if I can smell it, I hold my breath and go the other way. This mindset is born of both a genuine abhorrence for the addiction and its health effects, and as a means of shifting my thinking so as to ensure partaking will never again occur.

Here I am, Day 65 of not drinking booze, and I appear to be using the same psychology on myself. It seems appropriate to be a Reformed Smoker (what with all the second-hand smoke and all), embracing the assholeishness that goes with that philosophy. The propriety of embracing the philosophy of Reformed Drinker is not quite as clear-cut.

Everywhere I go, I see drunk people. Last weekend, I was sitting on my sofa reading blogs when someone knocked on my neighbor’s door. Our front doors are very close together, so I can hear when she’s having a conversation on her front porch. As I’m tuning them out, I hear a knock at my door. As an introvert, unscheduled knocks at my door generally annoy me. This knock was no different. But curiosity got the better of me, so I answered. As it turns out, my neighbor (Katherine) was talking with another neighbor (Tansy) and other neighbor’s ex-husband (Bob). We all know Bob because Tansy and Bob, despite being divorced for many years, spend the majority of their free time together. Tansy was taking Bob around the neighborhood to introduce him to his new neighbors. Bob is moving into our condo complex directly across the drive from Tansy. Yes, Tansy and her ex-husband are now living within yards of one another in separate condos.

As I stand on my front porch talking with Katherine, Tansy, and Bob, I notice the very pronounced odor of alcohol. Tansy is standing closest to me, and is quite animated, so I figure she and Bob have been out drinking. It’s 3:00 p.m. on a Sunday afternoon. I’ll be the first to admit that I have, on many occasions, been out drinking on a beautiful Sunday afternoon. Well, actually, I was more inclined to do my drinking at home, by the pool or in my garden watching the birds. I got Katherine very drunk one Sunday doing yard work and drinking margaritas. She hasn’t allowed me to serve her anything frozen since.

Tansy and Bob, who are drunk on a Sunday afternoon, leave us to continue their rounds of introducing Bob to his new neighbors. I am struck by my distaste for the idea of Sunday Afternoon Drunkenness. (Note the acronym.)

I tell my neighbor, “Boy, the booze smell was strong.”

“I smelled it, too,” says Katherine. “Do you think that’s why Tansy divorced Bob. Because of his drinking?”

“Well I hope you don’t think badly of me when I’m drinking, now that you’re not. And you know I never drink very much.”

It occurs to me I’m in danger of becoming a Reformed Drinker. The trouble is, I really do hate what alcohol does to people. I’ve got two brothers dead in their 50s from it. And a father who frequently raged during his binges. In fact, I don’t know what took me so long to quit. And now, everyone’s drinking has become suspicious. People whom I thought were “normies” probably are not normies. They just seem like normies because so many people are alcohol abusers. (I’m beginning to realize lots of people I thought were normies are really high-functioning alcohol abusers. The subject of another post, perhaps.) 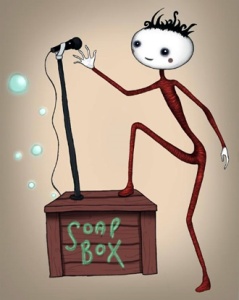 And holy shit, I’ve got one step on a soap box.

I’m not quite sure what to do about this. I need to not like alcohol, and to keep in the forefront of my mind why it’s crap, in order to prevent myself from waxing lyrical about the good ole days of yore. But at the same time, I don’t want to become an asshole. Or more of an asshole than I already am.

Here’s another, more marked example. As I said, I live in a condo. There’s a homeowners association. A board. I’ve been on the board a couple of times, being the control freak that I am. We didn’t have recycling. I wanted recycling. I became the HOA president. We now have single-stream recycling. I’ve been off the board for many years now, and the property recently has fallen into disrepair. Despite lots of grumbling by the owners, nothing’s being done. The landscaping has gone to shit, the management company (since terminated) hadn’t been paying bills timely (resulting in cessation of trash and my beloved recycling pickup for several weeks), and the board hadn’t been monitoring our financials. So I decided to bite the bullet and get back on the board until things are straightened out.

The officer terms are staggered and the spot coming open at the annual meeting is president, while the secretary and treasurer have one more year left of their terms. The current president travels a lot and appears disinterested in fulfilling his obligations and his fiduciary duty to the owners. The treasurer, a minister, is prone to sneaking vodka at gatherings when his wife’s not looking. In fact, I sneaked a pint into a pool party for him a couple of years back. At the time, I just figured his wife was overbearing and he wanted to have a little fun. The secretary is a lovely woman who has been doing her best to keep things afloat in the face of an absent president and an ineffective treasurer.

On Thursday at 6:30 p.m., we had our annual meeting. Five minutes after the meeting was to start, our treasurer still had not arrived. Someone called him at home, which prompted him to eventually show up. While a seat was saved for him in front, he insisted on sitting in the back corner. His contribution to the meeting was effusively thanking the ineffective outgoing president for his (nominal) contributions. He was slurry and not entirely coherent. Ten minutes later, he repeated his speech, seemingly forgetting he’d just said the same thing minutes before. When it came time for nominations, he was asked whether he wished to relinquish his post as treasurer. It looked as if he was about to stand down, when (to my dismay) he did an abrupt about-face, and agreed to continue. It then came time to fill the president’s spot. I offered to step up, was nominated, and had no challenger. (We are an apathetic group.)

After the meeting, I spoke with the treasurer, who wreaked of Listerine. I felt disgust mixed with pity. I find those feelings a bit distressing. It’s the same mix of feelings I had when my brothers were drunk, which they always were, unless they were in a rare period of sobriety. (And yet, I kept drinking.) Now that I am no longer drinking, I want to view alcohol and drinking objectively (to keep me on my toes), and at the same time, not be an asshole.

To my thinking, it’s okay to be a Reformed Smoker, but being a Reformed Drinker is different. The question I’m struggling with: How do you deal with the alcohol abusers in your orbit after you’ve given up the booze?